The PARCC Evidence Statement Table for Geometry EOY, G-CO.3, says: A trapezoid is defined as “A quadrilateral with at least one pair of parallel sides.”

Usiskin (and I’m sure others – he was just the first one from whom I read it) call this the inclusive definition of a trapezoid.

On a side note, I’ve been looking for real CCSS geometry resources. I usually first look at where the unit on transformations is located. If it’s not 1st or 2nd, then that is a clear sign to me that the text hasn’t really been edited for CCSS-M. I’ve been forgetting to look at how they talk about trapezoids. Not that every CCSS-M textbook resource has to define trapezoids like PARCC does, but are they even suggesting the inclusive definition as a possibility?

Our Venn Diagram arrangement of the quadrilaterals has been deleted.

Several of our practice problems have had to be rewritten:

Old: By definition, what is a quadrilateral with exactly one pair of opposite sides parallel?

New: By definition, what is a quadrilateral with at least one pair of opposite sides parallel?

Old: By definition, what is a quadrilateral in which both pairs of opposite sides are parallel?

New: By definition, what is a trapezoid in which both pairs of opposite sides are parallel?

Technically, we could have kept the old question, but we changed it since we are trying to emphasize the new definition.

Old: Which statement is NEVER true?

A. Square ABCD is a rhombus.

B. Parallelogram PQRS is a square.

C. Trapezoid GHJK is a parallelogram.

D. Square WXYZ is a parallelogram.

New: We deleted this question completely. But now that I look at it more closely, I guess we could have changed parallelogram in choice C to kite.

Old: Two consecutive angles of a trapezoid are right angles. Four of the following statements about the trapezoid could be true. Which statement CANNOT be true?

A. The two right angles are base angles.

B. The diagonals are not congruent.

C. Two of the sides are congruent.

D. No two sides are congruent.

New: We added the word Exactly at the beginning of the question stem.

Old: Write the number of each of the five figures in the appropriate region of the diagram.

New: We didn’t have to change the question…only the solution.

Another question I have had is whether K-8 teachers know about this inclusive definition of trapezoid. Does it bother students for a definition to change midway through their years of school? Or do we need to start a campaign to inform teachers about this definition who might not be reading the PARCC Evidence Statement Table for Geometry EOY? Just for the record, I think my students are okay with this definition. They have actually been more flexible in their thinking than the teachers.

Last year, my 2nd grader came home with this question on a worksheet, which I shared with my students.

Unfortunately, the intention was to mark one response even though my daughter marked more than one response.

Can you imagine the distress of having a 4th figure that is a non-special trapezoid with directions to “Mark the trapezoid”?

As far as exploring properties of a trapezoid, I really like the inclusive definition of a trapezoid. We built a trapezoid using our dynamic geometry software. We recognize that two pairs of consecutive angles are supplementary. But as we move the vertices to observe what stays the same and what changes, we recognize that there are times when all pairs of consecutive angles are supplementary. A trapezoid can be a parallelogram. 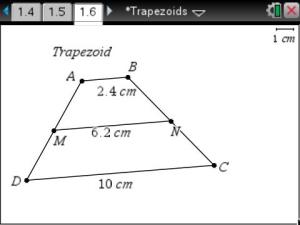 I am glad that this conversation was started elsewhere, and that I easily found it through Google. The graphic organizer on Mr. Chase’s blog posts has been most helpful in thinking through this change.

Why I hate the definition of trapezoids

Why I hate the definition of trapezoids (again)

Why I hate the definition of trapezoids (part 3)

It’s nice not to be alone as the journey continues ….