We look specifically at 45-45-90 triangles on the first day of our Right Triangles unit. I’ve already written specifically about what the 45-45-90 exploration looked like, but I wanted to note a conversation that we had before that exploration.

Jill and I had recently talked about introducing new learning by drawing on what students already know. I’ve always started 45-45-90 triangles by having students think about what they already know about these triangles (even though many have never called them 45-45-90 triangles before). After hearing about one of Jill’s classes, though, I started by asking students to make a column for triangles, right triangles, and equilateral triangles, noting what they know to always be true for each. This short exercise gave students the opportunity to attend to precision with their vocabulary.

In my seconds of anticipating student responses, I expected one visual but got something very different. 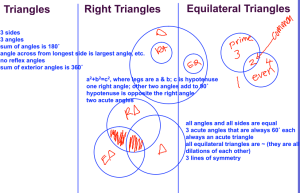 Then we thought specifically about 45-45-90 triangles. What do you already know? Students practiced look for and make use of structure.

One student suggested that the legs are half the length of the hypotenuse. Instead of saying that wouldn’t work or not writing it on our list, I added it to the list and then later asked what would be the hypotenuse for a triangle with legs that are 5.

I wrote 10 on the hypotenuse and waited.

But that’s not a triangle?

It would collapse (students have a visual image for a triangle collapsing from our previous work on the Triangle Inequality Theorem).

Does the Pythagorean Theorem work for 5-5-10?

Students reflected the triangles about the legs and hypotenuse to compose the 45-45-90 triangle into squares and rectangles. 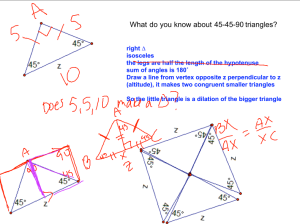 And then we focused on the relationship between the legs and the hypotenuse using the Math Nspired activity Special Right Triangles.

And so the journey continues … listening to and learning alongside my students.