Now that school is out, I am going back through our last few student surveys to make notes for next year.

Level 1: I can represent and use vertices of a geometric figure in the coordinate plane. 100% Strongly Agree or Agree

Level 2: I can use the equation of a circle in the coordinate plane to solve problems. 96% Strongly Agree or Agree

Level 3: I can use slope, distance, and midpoint along with properties of geometric objects to verify claims about the objects. 96% Strongly Agree or Agree

Level 4: I can partition a segment in a given ratio. 81% Strongly Agree or Agree

5. Prove the slope criteria for parallel and perpendicular lines and use them to solve geometric problems (e.g., find the equation of a line parallel or perpendicular to a given line that passes through a given point).

6. Find the point on a directed line segment between two given points that partitions the segment in a given ratio.

7. Use coordinates to compute perimeters of polygons and areas of triangles and rectangles, e.g., using the distance formula.

Students answered that they used look for and make use of structure the most. They used make sense of problems and persevere in solving them and model with mathematics next.

Think back through the lessons. Did you feel that any were repeats of material that you already knew? If so, which parts?

Think back through the lessons. Was there a lesson or activity that was particularly helpful for you to meet the learning targets for this unit?

What have you learned during this unit?

We have struggled to know whether it is best to have a separate coordinate geometry unit or whether we should be using coordinate geometry all year. To me, it is kind of like wondering in a calculus class whether you do early or late transcendentals. I like late transcendentals, because students go back through differentiation and integration towards the end of the course, and they really have to think about which one they are using and why. It turns out to be a nice culminating review that wouldn’t happen if we had been differentiating exponential and logarithmic functions along the way.

And so the journey continues … always trying to figure out what works best for student learning.

Tags: coordinate geometry, I Can statements, I have learned, Standards for Mathematical Practice, Student Reflection

How would you give students ownership of this standard?

We had been reasoning quantitatively and were ready to move into reasoning abstractly.

Where would you conveniently locate each figure in the coordinate plane?

Some students put a vertex of the square at the origin.

Others put the center of the square at the origin.

What about a parallelogram? 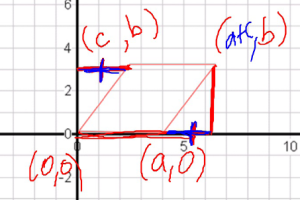 What about the coordinates for point P in this parallelogram?

I loved seeing how students wrote their responses in different ways. You can see how they were thinking about calculating the coordinates of the P, which led to good whole class discourse. 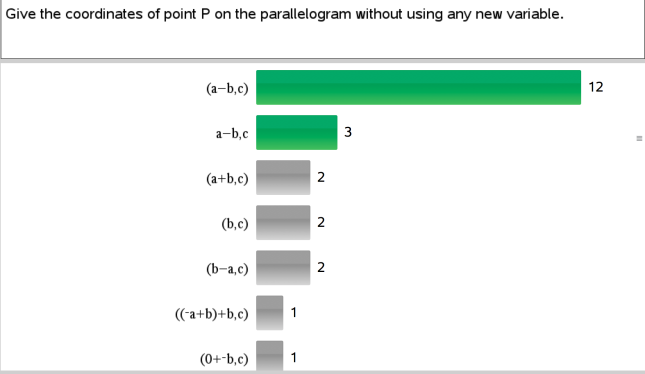 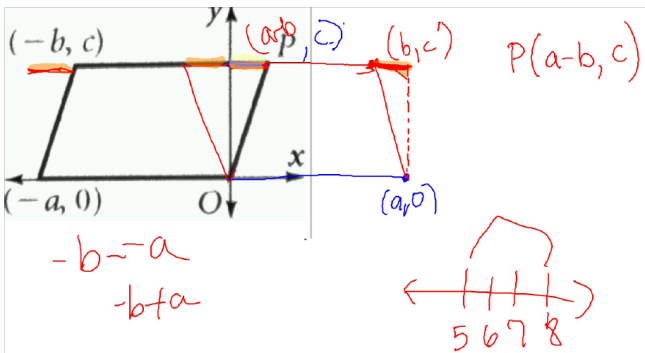 How would you locate a kite in the coordinate plane?

Several students showed us what they did on our interactive whiteboard.

And one made me realize that I need to make my kite less special. The almost right angle for the “top” angle of the kite (when oriented “normally”) led to a response that a non-right angle might not have.

We reasoned abstractly to show that the diagonals of a rectangle are congruent. Some students used the distance formula.

Others used the Pythagorean Theorem.

We reasoned abstractly with triangles.

But we still need more work. Only 20% of students were successful on this question on their summative assessment.

At least we get a do over for next year, right? And so the journey continues … learning and revising.

Posted by jwilson828 on May 3, 2014 in Coordinate Geometry, Geometry

Squares on a Coordinate Grid

I was excited to find a new Illustrative Mathematics task using coordinate geometry.

CCSS-M G-GPE.B.7 Use coordinates to compute perimeters of polygons and areas of triangles and rectangles, e.g., using the distance formula.

In the picture below a square is outlined whose vertices lie on the coordinate grid points:

The area of this particular square is 16 square units. For each whole number n between 1 and 10, find a square with vertices on the coordinate grid whose area is n square units or show that there is no such square.

As a precursor to the task, I included the following statements on the bell work for students to discuss in their groups before we had a brief class discussion.

The three sides of a right triangle can all be even.

The three sides of a right triangle can all be odd. 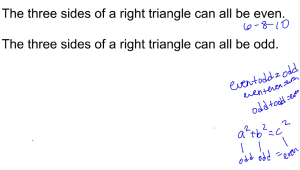 Last year, I heard Linda Griffith talk about giving a part of this task to some students in Arkansas. I began with my students the way she began with hers. Each student had a sheet of graph centimeter graph paper and a straightedge. Near the top left corner, draw a square with an area of 1 square centimeter.

Challenge accepted, although some students drew their square in the top right corner.

This took longer, but it was a good reminder of what we need for a dilation.

What happened? What can you tell me about your image? 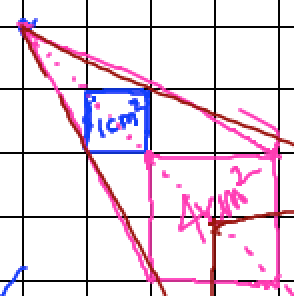 It has an area of 4 square centimeters.

How do you know?

I counted the squares.

Someone else noted that the similarity ratio is 1:2, so the ratio of the areas is 1:4.

What will happen if you dilate your original square by a scale factor of 3.

We will get a square with an area of 9.

And so they did.

Now. Here is our goal for this lesson: For each whole number n between 1 and 10, find a square with vertices on the coordinate grid whose area is n square units or show that there is no such square.

Yes. So now I want you to draw a square with an area of 2 square centimeters. I’d like for you to work by yourself for 2 minutes, and then you can share what you’ve found with your group.

I watched while they worked. I saw many students approximating √2 on their calculator. I saw several students who had made a rectangle with an area of 2 square centimeters. I saw one student who had immediately thought of 45-45-90 triangles and had drawn a square with an exact area of 2. Everyone was doing something, even if they were using approximations.

After two minutes, I told students they could work together now, and that I had two reminders: I have asked you to draw a square. And I want it to have an exact area of 2 square centimeters.

I heard great conversation. I asked a few of those who had approximated the side length of their square how they knew the side was √2. Linda Griffith told a great story last year about some of her students: they decided to put “not drawn to scale” next to their diagram, as they had seen on one too many of the diagrams from their geometry class. Several others made the 45-45-90-connection for an isosceles right triangle with a leg of length 1 cm to get the desired square. I listened to one group who realized they had confused whether a square is always a rectangle or a rectangle is always a square take their rectangle and compose its parts a different way to get a square.

I decided to have them share first. It occurred to me after they started talking that I should video their explanation. I caught part of it.

I love that these two took their rectangle of area 2 and rearranged it to make a square of area 2.

Next I asked the student who had immediately thought of 45-45-90 to explain her thinking.

She related her work to the Pythagorean Theorem.

And finally one other student shared who had composed his square differently from the girls with the rectangle.

Now that we have a square with an area of 2, what other square areas can we easily get?

Of course a dilation by a scale factor of 2 will give us a square with an area of 8.

What side length does that square have? 2√2.

Several students simultaneously thought about 3-4-5 right triangles. So what does that give us? An area of 25, which we can get with oblique side lengths from the 3-4-5 triangle or horizontal/vertical side lengths of 5 cm.

Students continued working, many coming up with a 1-2-√5 triangle from which to draw a square with an area of 5. 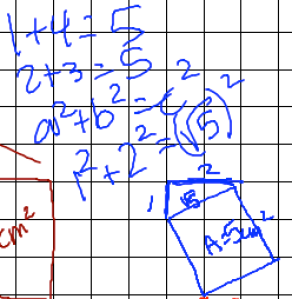 I was expecting to hear 12+32=10, and I did hear that. But I also heard (√5)2+(√5)2=10, which I didn’t hear as loudly because I wasn’t expecting to hear it. You would think I’d have learned by now to pay closer attention to what my students actually say. What I am learning, though, is that it takes time to process student thinking for a task that isn’t “cookie cutter”, and I don’t always do that quickly in class, especially when the bell is about to ring. We ended with a discussion of more than one way to get a square with an area of 10 – and I left 3, 6, and 7 for the students to finish exploring outside of class.

Posted by jwilson828 on March 17, 2014 in Coordinate Geometry, Geometry