The Center of a Circle

The Center of a Circle

I wrote about last year’s lesson here, but decided to write a new post since the lesson played out differently this year.

This question requires you to show your work and explain your reasoning. You may use drawings, words, and numbers in your explanation. Your answer should be clear enough so that another person could read it and understand your thinking. It is important that you show all your work.

Describe a procedure for locating the point that is the center of a circular paper disk. Use geometric definitions, properties, or principles to explain why your procedure is correct. Use the disk provided to help you formulate your procedure. You may write on it or fold it in any way that you find helpful, but it will not be collected.

The NAEP results were not hugely promising in 1996. 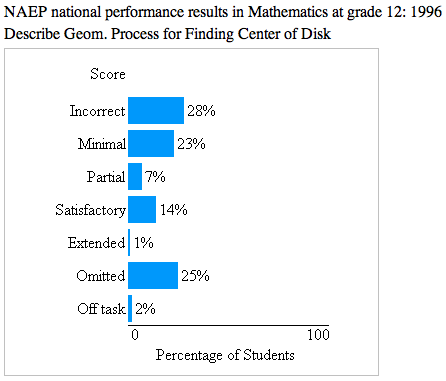 In the past, I’ve had my students start by thinking about and then doing a procedure for locating the center of a circular paper disk. This year, I had them write their procedure like the NAEP question requires. I didn’t really know what I was going to do after I had them write it. Since they were writing on paper, I didn’t know what responses I had, so I couldn’t exactly select and sequence student work as noted by Smith and Stein’s book 5 Practices for Orchestrating Productive Mathematics Discussions.

I noticed, though, that without my asking them, several students had started trying their procedure using a geometry page on TI-Nspire. So I decided we should all try that. Once everyone had finished describing their procedure, they tried it on a circle using our dynamic geometry software.

Now I was able to select and sequence using Class Capture. Whose would you choose to discuss with the whole class? 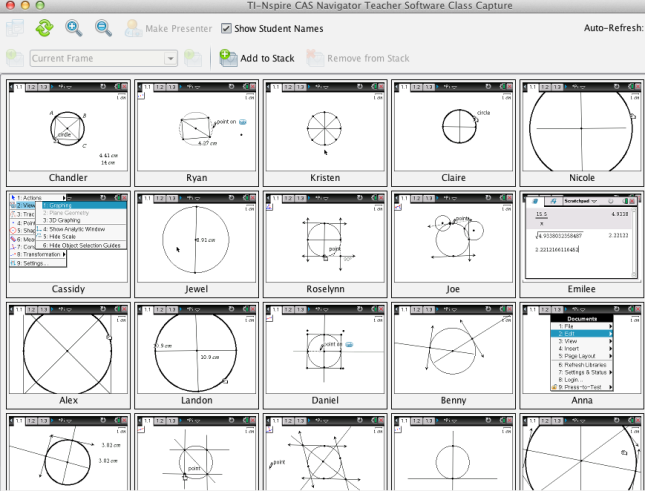 We started by making S.N. the Live Presenter, who without knowing it, had the traditional construction for finding the center of the circle. She created a chord, and then its perpendicular bisector, and then the midpoint of the segment of the perpendicular bisectors with endpoints on the circle. When we first looked at hers, the chord was “centered”. It was easy to show using our dynamic geometry software that the location of the chord does not matter. 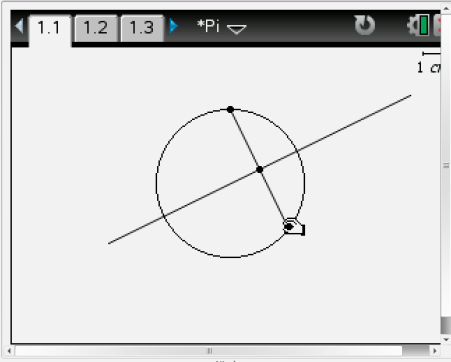 Another student inscribed a rectangle in the circle and found the intersection of its diagonals.

Or almost. Sometimes what happens isn’t what we think happens. In this case, the student was off just a bit when forming the diagonals. Our dynamic geometry software helps us learn to attend to precision.

And another student circumscribed a square about the circle, and found the intersection of the perpendicular bisectors of the sides.

Another student circumscribed a square about the circle and found the intersection of the diagonals of the square.

I read through the student work after class.

I had missed one interesting approach, but the beauty of using the TI-Nspire Navigator System meant that I still have the student work. I collected the document at the end of class and saved it to my Portfolio. We had an opportunity to talk about this relationship later in the unit.

I found an approach by a student new to our school from Iran, who only began learning English a few months ago. She attended to precision better than 99% of the grade 12 students who had this question on NAEP in 1996.

I found a pretty creative approach that took seriously use appropriate tools strategically.

It was interesting how many students thought to circumscribe a square about the circle. I’ve been using this task for about 10 years now, and my students haven’t used that approach before.

Finally, a few students thought to inscribe a rectangle in the circle, something my students had not suggested before.

And so the journey continues, learning about structure from my students year after year in different ways …

Posted by jwilson828 on March 2, 2014 in Circles, Geometry, Tools of Geometry

Tags: attend to precision, Class Capture, construct the center of a circle, Live Presenter, look for and make use of structure, NAEP math task, TI-Nspire Navigator

2 responses to “The Center of a Circle”