Understand and apply theorems about circles

We used part of the Math Nspired activity Intersecting Lines and Segment Measures for this lesson.

What is the relationship among the four segments created when two chords intersect?

I sent a Quick Poll asking my students to estimate the value of x before we began our exploration. Just over one-third got it correct. 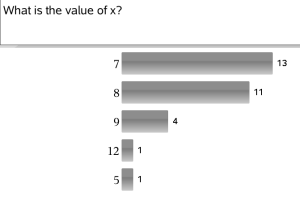 We moved to the technology to see if we could look for regularity in repeated reasoning. The relationship between the segments formed by the chords was not evident to students, even using the technology.

My students are having to learn how to take risks. They enter my classroom afraid of answering incorrectly. When I ask “what do you notice”, they are hesitant to answer because what they notice might not be what they were supposed to notice. We are having to change the mindset of students. It is okay to be wrong; we learn from our mistakes.

One student finally took a risk: I noticed that the segments were proportional.

Okay. Could you give us a proportion? PA:PD=PB:PC.

Let’s look at that for a moment. Look at your screen. Is it true, with the measurements that you have, that PA:PD=PB:PC?

Do you see triangles in this picture?

(I saw ∆PBA and ∆PCD. It happens so often that my students see differently than I, which always makes me happy that I asked and didn’t draw in my own triangles.)

Another student took a risk. I can’t remember now what method she named, but it wasn’t a method for proving triangles similar – it was a method that worked to prove triangles congruent. But it is okay that she was wrong. We learned something from that mistake.

We made a list of methods we could use to prove the triangles similar: a sequence of transformations that included a dilation, or SAS~, AA~, SSS~.

What do we know in this diagram? We know PA:PD=PB:PC.

Well, actually, that is what we are trying to prove. So we can’t use that in our proof of why the triangles must be similar. Instead, that will be a result of similarity.

Some students recognized that ∆PDA~∆PCB because of a rotation and dilation. Someone else asked me to number the angles. I see that ∠2 ≅∠5 because vertical angles are congruent.

So are any other angle pairs congruent?

∠3 is inscribed in arc AB.

So they are congruent.

The green marks on the diagram came after the noticing.

So the triangles are also similar by AA~, which makes the corresponding side lengths proportional.

If you look in a textbook, you won’t see PA:PD=PB:PC. Instead, you’ll see PA∙PC=PD∙PB.

A Quick Poll to assess student understanding showed that we were at just over 80% correct.

What is the relationship among the segments formed when two secant segments intersect outside the circle?

We didn’t take the time for a first guess. We went straight to the exploration.

After watching our dynamic geometry software move, I sent a poll.

I’m trying to ease the hurry syndrome, but the seconds are ticking away. We spent a long time making sense of the proof with the chords, and we only have a few minutes left before the bell will ring to end class.

I stopped the poll once half of the class has gotten it correct.

We formalize our conjecture. We look for and make use of structure. What auxiliary lines do we need to show the similar triangles for this diagram? 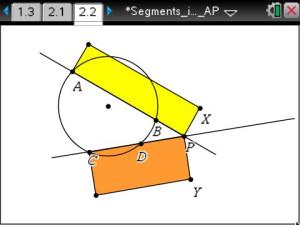 And when one secant segment turns into a tangent segment? 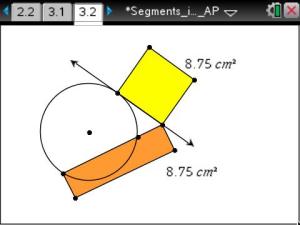 Students had practice for this last diagram outside of class – and on the bell work at the beginning of the next class.

And so the journey to ease the hurry syndrome continues, sometimes successfully, and sometimes not …

2 responses to “Segments in Circles”