RSS
← Pythagorean Relationships: The Question That Probes
The Similarity Ratio →

G-SRT 4. Prove theorems about triangles. Theorems include: a line parallel to one side of a triangle divides the other two proportionally, and conversely; the Pythagorean Theorem proved using triangle similarity.

G-SRT 5. Use congruence and similarity criteria for triangles to solve problems and to prove relationships in geometric figures.

I have struggled some to know which additional theorems we should include when teaching G-SRT 4. So, at least for now, my best source for whether to teach something that we have traditionally included has been to ask my juniors and seniors who have recently taken a high stakes standardized test for college entry and scholarships. I get that my only reason to teach something shouldn’t be whether or not it is “on the test”, but I don’t want my students to be at a disadvantage when they go to take the test.

We started the Dilations unit by showing that two triangles are similar when there is a dilation and if needed, set of rigid motions, to map one figure onto another. In our lesson on Similarity Theorems, we discuss similarity criteria for triangles in terms of the traditional similarity theorems: AA~, SAS~, SSS~. We formatively assess that students can use the similarity theorems.

Are the figures similar? If so, why? 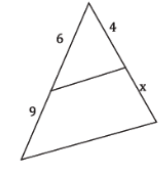 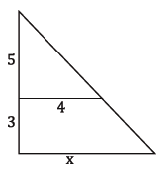 If the figures are similar, then what is the value of x?

Students always do well with the first triangle but not with the second. Asking the second uncovers student misconceptions.

We briefly explored 3 other theorems dealing with similar figures.

1. A midsegment of a triangle is a segment that connects the midpoints of two sides of the triangle. What is the relationship between the midsegment and the third side of the triangle? We used part of the Geometry Nspired activity called Triangle Midsegments for this exploration. 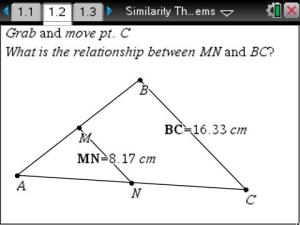 We formatively assess to be sure that students can use what they have observed.

And then we prove the theorem. 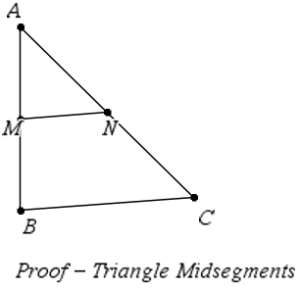 Formatively assess to be sure students can use what they observed.

And then prove the theorem.

We used look for and make use of structure. The auxiliary line gives us something two cases of “a line parallel to one side of a triangle divides the other two proportionally”, and then we can use the parallel lines and transversal to show that the two triangles are similar to each other by AA~.

Formatively assess to be sure students can use what they observed.

And then prove the theorem.

What auxiliary lines would be helpful? 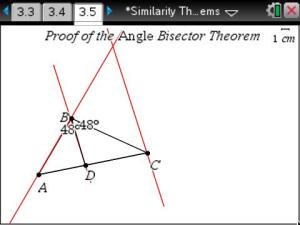 I started reading The Joy of X this morning. I love Steven Strogatz’ quote at the bottom of page 5: “Logic leaves us no choice. In that sense, math always involves both invention and discovery: we invent the concepts but discover their consequences. … in mathematics our freedom lies in the questions we ask – and in how we pursue them – but not in the answers awaiting us.”

And so the journey to ask more questions continues …

← Pythagorean Relationships: The Question That Probes
The Similarity Ratio →